Priscila S. suffered from hearing loss caused by a cholesteatoma. After struggling with her own hearing, she had a son with a completely different type of hearing loss. After both treated their hearing loss with hearing implants, hers a bone conduction implant and his a Cochlear™ implant, she found her voice in creating works of art honoring those with hearing loss:

“It all started when I was 17 years old, when I still lived in Brazil, where I was born. Until then, I had never noticed I had a hearing loss. That year the doctor told me that I had a cholesteatoma in my right ear. It had already pierced my eardrum and corroded part of the bones in my ear. Something went wrong in that surgery and I left the surgery with total hearing loss on that side. To me, that is when my life with hearing loss truly began. 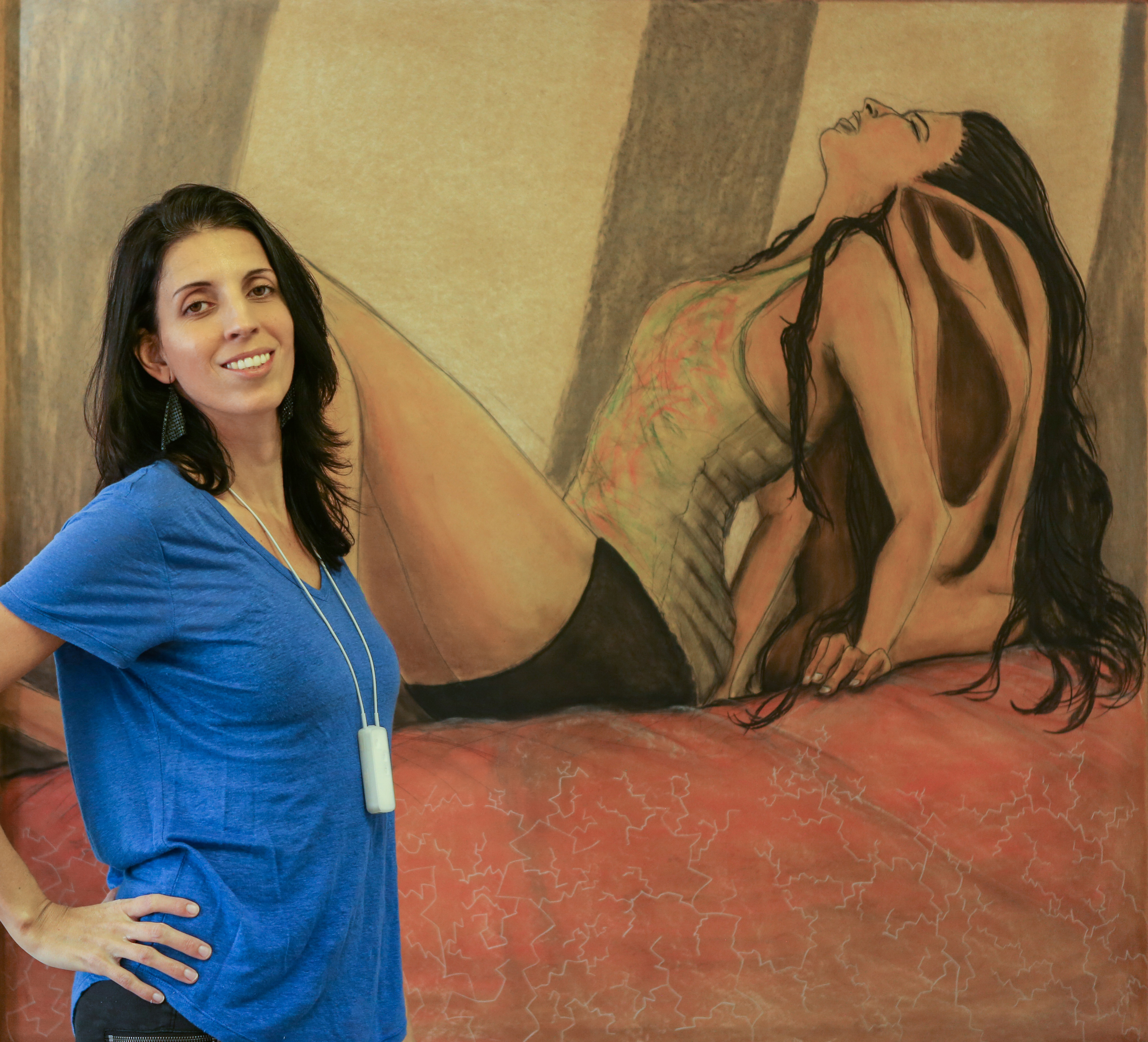 I was always very artistic, I got involved in everything that had to do with the arts: painting, sculpture, photography, cinema, theater, drawing and so on. At the age of 20, I decided to leave Brazil and go to the United States to study motion picture in California.

Making choices based on hearing loss 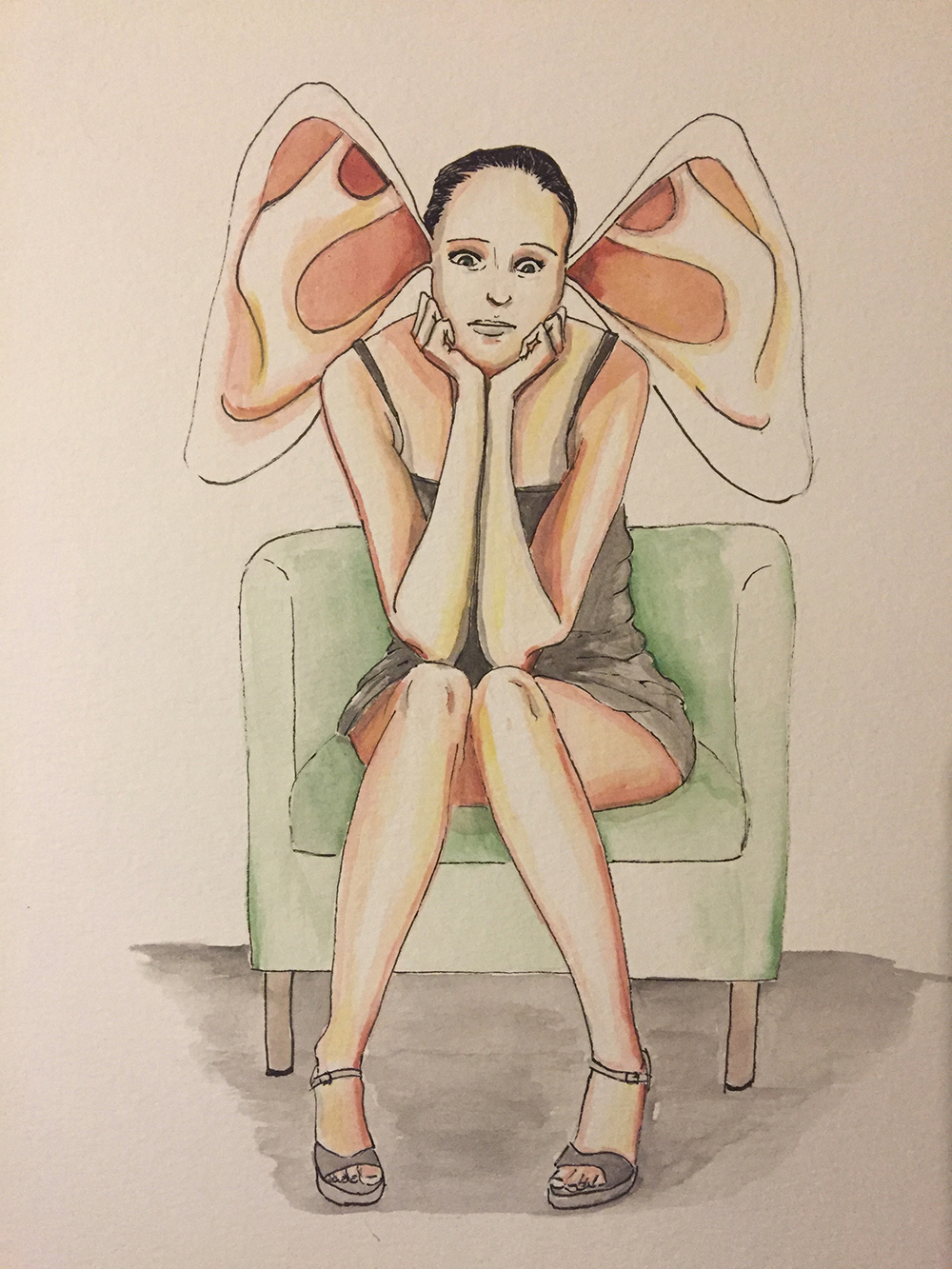 Without realizing it, I began to make choices based on what I could or could not hear. For example, after many years I realized that I only had friends who liked to speak loudly. You know the people whose voice is present to everyone when they enter a room? Those were my friends. People who spoke softly left me sweating cold. Back then, no one had ever told me that I could benefit from a hearing aid, so I simply did the best I could.

When I was 24, I discovered that a cholesteatoma was now invading my left ear and with a new surgery, I found out it had already completely corroded all the bones in my left ear. When it was removed, everything sounded much lower. I remember crying a few days after my surgery, asking the hospital if I could borrow a hearing aid. I wanted to use it until I had time to purchase my own because I had a wedding to go to, and I could not communicate with anyone without the help of a hearing device.

My son and his hearing loss 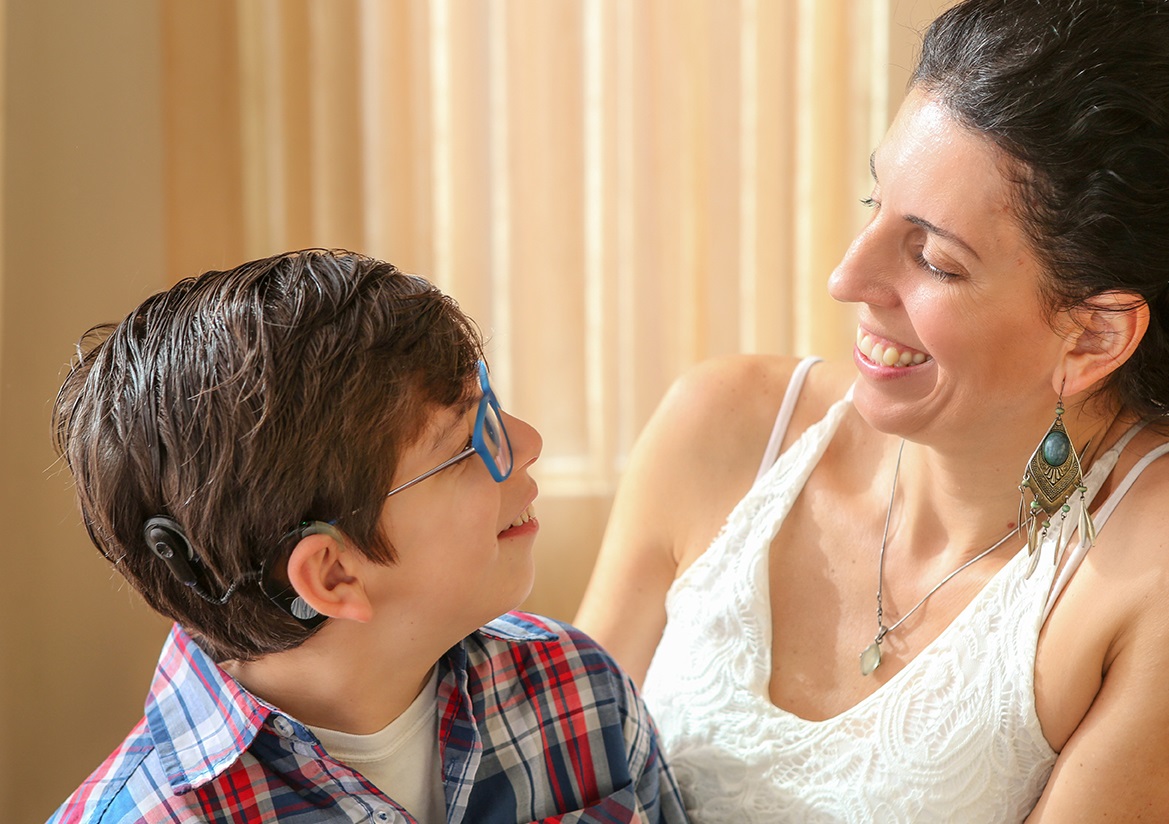 I bought my first hearing aid for my left ear (there was nothing more that could be helped for my right side, which was too deaf for assistance with a hearing aid). Even with that, I began to be very afraid of putting myself in situations where I would have to communicate with several people at the same time. I started to avoid those situations at any cost. I became more introspective and I questioned what career I should follow. I had my first child, Lucas, when I was still finishing college and three years later, I had Jason.

Jason’s birth marked my life unexpectedly. He did not pass the hearing screening test when he was born. We found no genetic link between his hearing loss and mine. Around the same time, my marriage collapsed. I became a single mother of two small boys and was jobless.

I then started taking small designer jobs at home and participated in Jason’s preschool as a teacher’s aid. He was fit with his first pair of hearing aids when he was 11 months old. I wanted to learn everything I could to help him communicate with the world. I began to educate myself about the Deaf and hearing-impaired world and met other families and professionals involved.

I was discovering how much I had repressed myself. How many things I had avoided, and how many things could have been different if I had received support and advocacy in the same way that my son received as soon as his hearing loss was detected.

When Jason was 3, his language was behind other kids in his class who had gotten their cochlear implants when they were younger. His hearing aids were just not doing much for him and after much research, we made the decision for him to get his cochlear implants and new doors of communication began to open up to him.

When trying to decide on cochlear implant brands for Jason, Cochlear seemed to have the best quality and features. I love Cochlear’s customer service too. My son adapted to his Cochlear implants quite well. He loves them! Sometimes it feels like he hears better than me even though he is deaf and I am hard of hearing. I say that because he can hear sounds from the distance and identify what they are without even looking at it. It is also so rewarding to watch him enjoying music, dancing and doodling on his guitar, which is something I wondered how he would experience once he got the Cochlear implants. 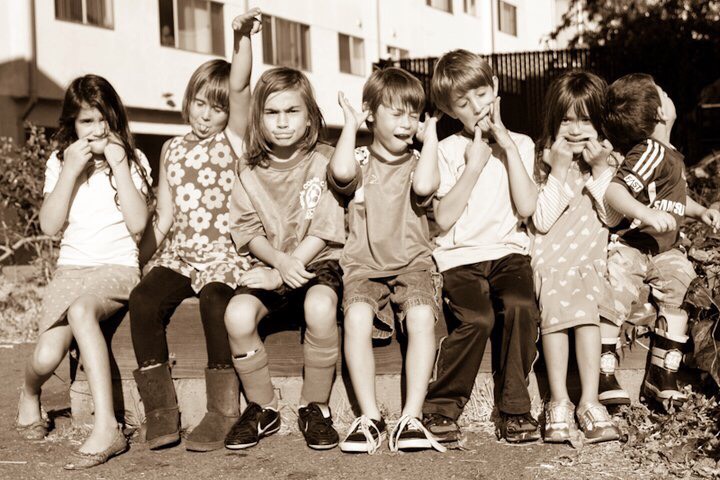 There is a moment I will never forget. A few months shortly after he received his Cochlear implants, I remember walking under the train tracks near our house with my two sons and a few of their friends. I told them all to sit down and make a silly face for a photograph. Right when I was about to take the picture, the train went by above them making a huge low sound. None of the other kids cared much because they were used to it and proceeded to do silly faces, but to my son, it was a fascinating and new sound. He could not help but look up with curiosity right as I was snapping the photo. It is one of my favorite pictures I have of him. 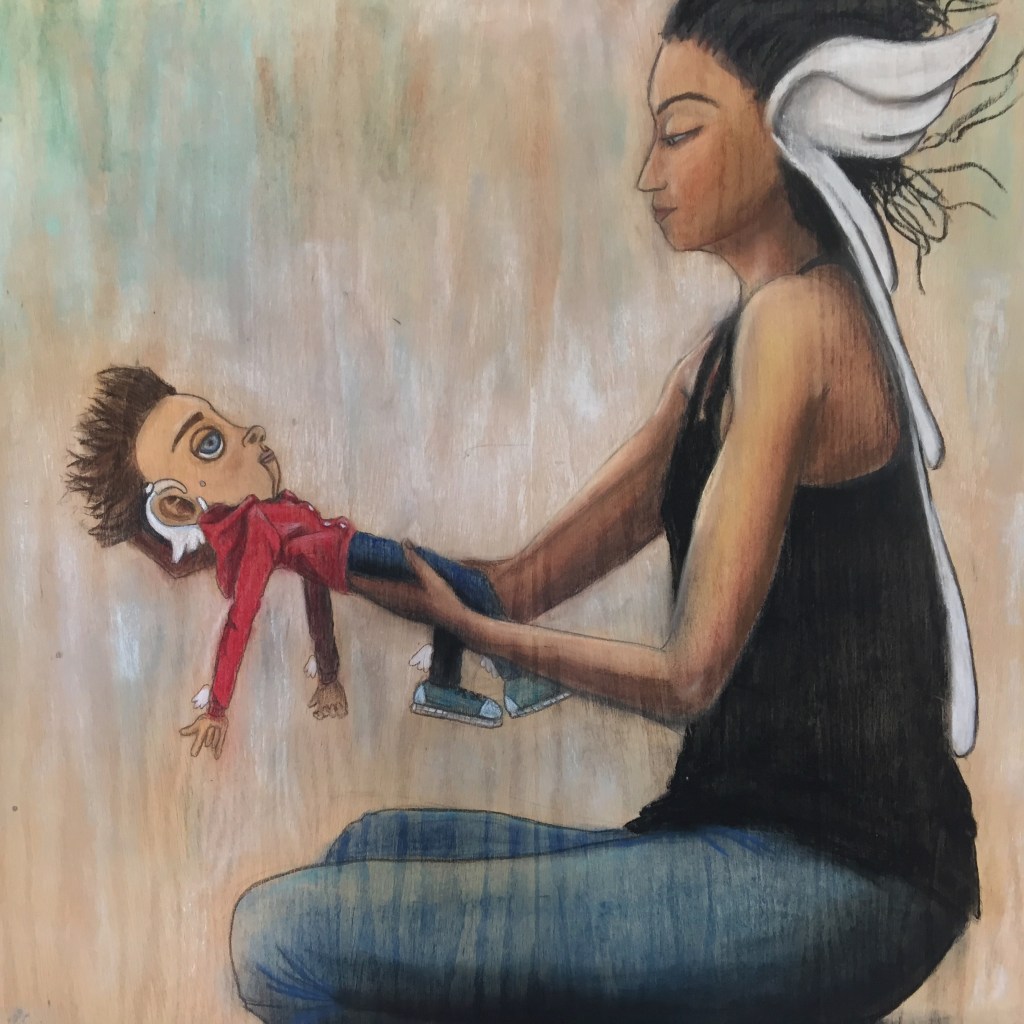 In 2015, Jason had his Cochlear implants for 6 years and was doing great at school. Even with all of this I felt a feeling that there was something greater to be done in my life, but I did not know what is was or how to start. I noticed how my art materials were filled with dust and cobwebs and I missed doing art. At the beginning of 2016, I told the family that I was finally ready to be a professional artist.

I did a meditation during one of my therapy sessions and received a message to ‘trust and let go.’ The therapist suggested that I open up to the idea of taking that message to journaling or to my art to see what comes up. That is where ‘My luckyears’ was truly born.

A mix of ‘lucky ears’ and ‘lucky years’, it was a way of uniting and honoring the things I became most passionate throughout the years: advocating for people with hearing loss and my art. My art began to come out in many ways, the more I created, the more ideas I had. A whirlwind of creative energy came out of me. I began to share my work on social media, started my website and received amazing feedback. I even got an art studio for the first time in my life.

Aside from my own story and my son’s story, now I have been portraying children with different types of hearing loss, documenting my process and sharing their own inspirational journeys within it. I have met so many of them after Jason was born with wonderful stories of their own, so I felt that my art could benefit and empower them to embrace who they truly are and then their stories would inspire others as well.

Encouragement through my art 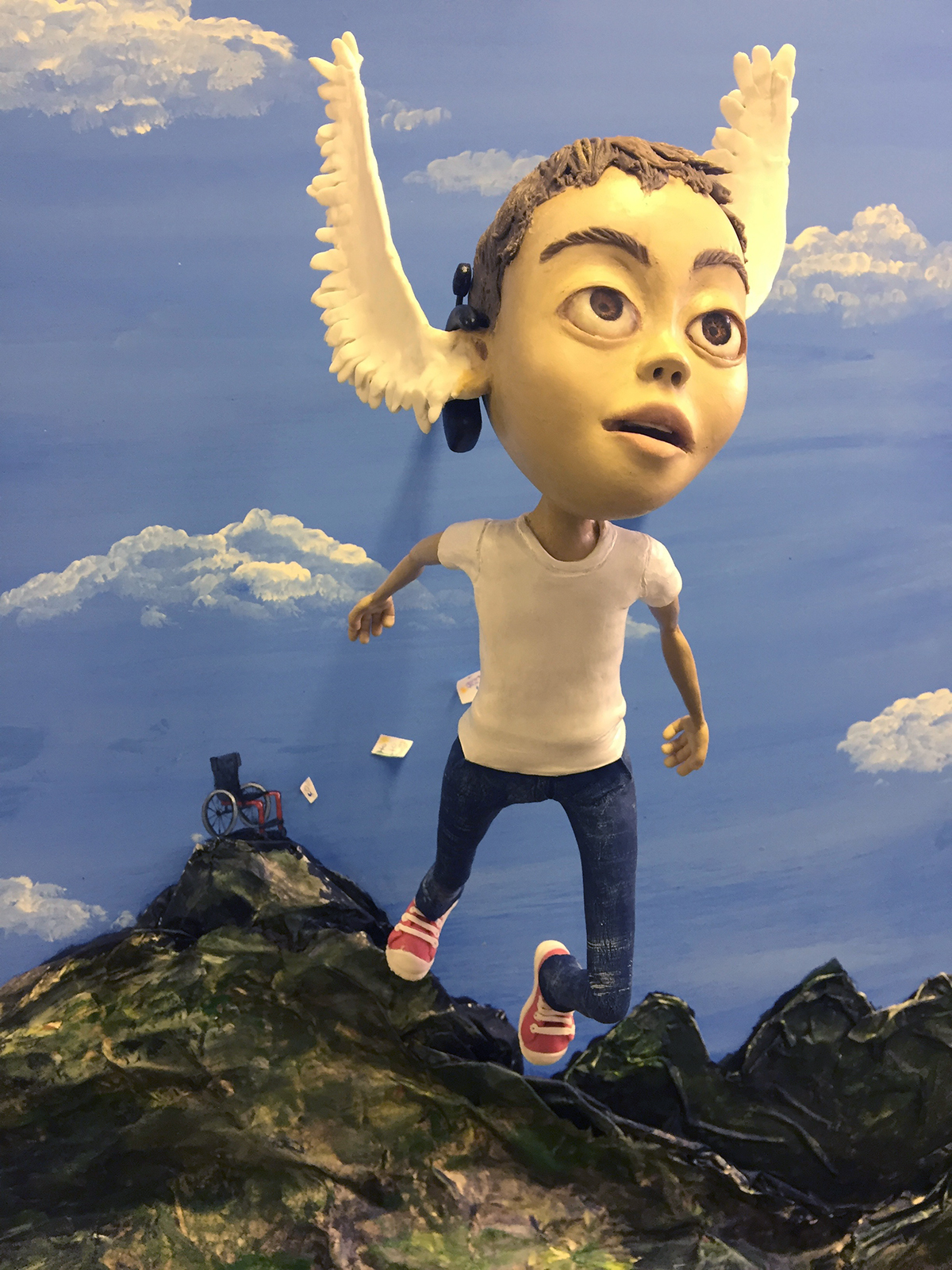 I dream of being able to encourage people to accept who they are without allowing fear to stop them from following their passion. Just by changing their perspective of it, it can all of a sudden become one of the things that makes you the most special and unique.

My work now feels bigger than me. Every step I take, I get to learn and teach, influence new people, make new connections and inspire others to overcome their own limiting beliefs. We need to educate ourselves and take action now. Life is much more about the rainbow than about the pot of gold at the end of it. Do not wait for it. Today is your day.”

Are you or your child struggling with hearing loss? Learn more today.