Devon S. struggled with ear infections, a cholesteatoma and hearing loss for her whole life. After worrying about wearing a hearing device for years, she decided it was time to be able to hear her children’s voices better. See how the Cochlear™ Baha® System with the Baha 5 Sound Processor gave Devon the ability to match her hair color to the sound processor and gave her the confidence to address her hearing loss:

“In my memories, it seemed I always had either a sinus or ear infection as a child, and the two alternated just enough that I was a constant presence in my doctor’s office. Things hit a peak when I was in the 7th grade, when my left ear started draining and I was referred to a pediatric ear, nose and throat doctor (ENT) at our local children’s hospital.

It was there that the doctor diagnosed with me a cholesteatoma, a gnarly little growth that had spent the last decade wrapping itself in and around the ossicles (tiny bones) of my left ear. Over the next nine years, I had seven surgeries to remove the recurrent growth and reconstruct my ear. By the time I started my first job after college at age 21, I had an ear canal made of bone pate, a middle ear full of artificial bones to mimic the natural hearing structures and a scarred two-inch hole behind my external ear. 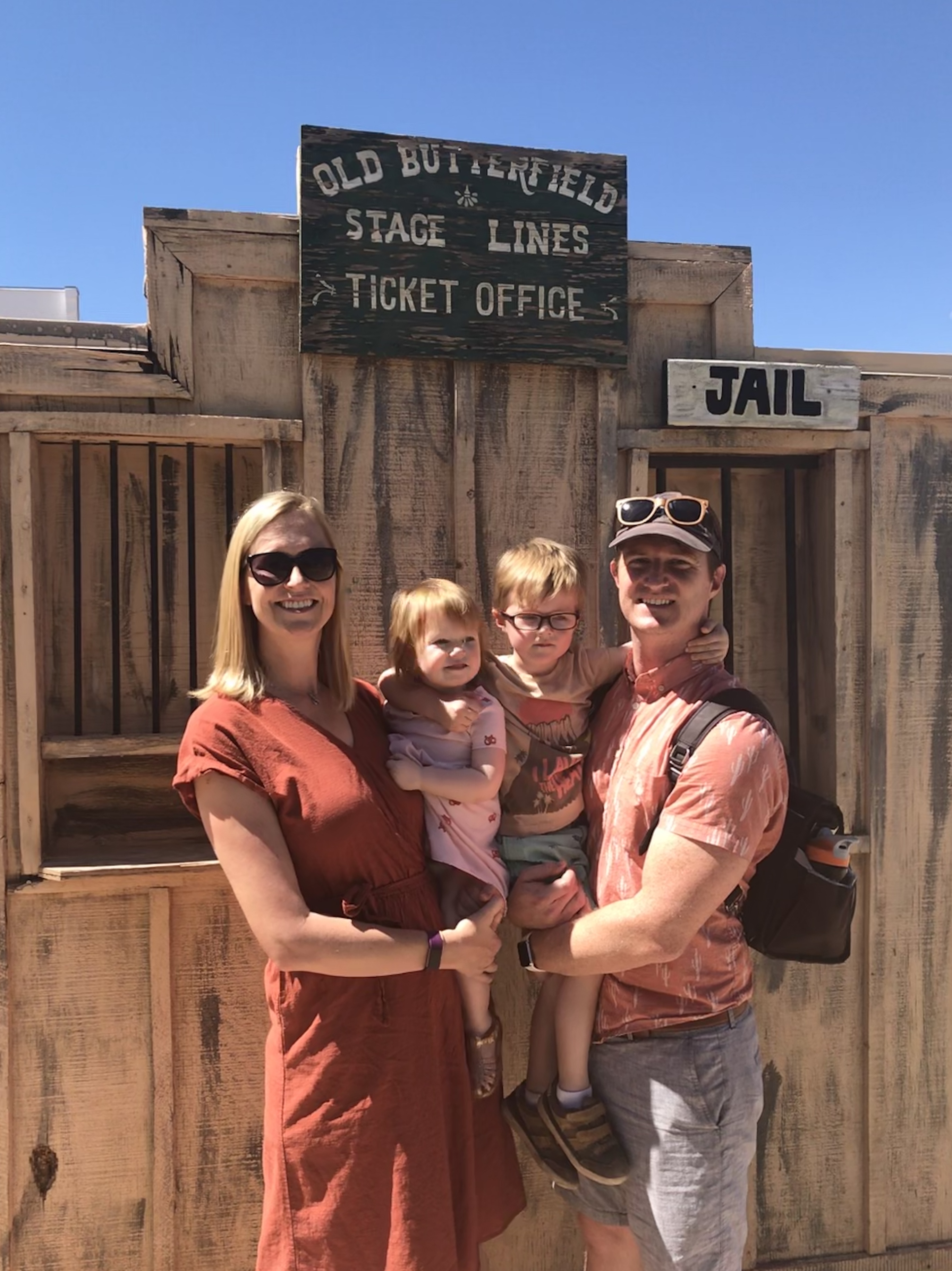 I cannot ever remember a time when I could hear out of my left ear, but with the hearing in my right ear more or less ‘normal,’ I tried to make do. My inability to hear was something I was extremely self-conscious about. Growing up, I was teased mercilessly for my bifocal glasses until I could wear contacts, and as a 6’2” woman, I always felt that I got enough stares from strangers that I did not want to advertise another reason that I was different.

Only close friends, family and significant others were ever let in on my ‘secret.’ That being how I preferred to watch TV with closed captions, that I preferred people position themselves on my right and that noisy public places were actually nice because it felt like it leveled the playing field. Annual visits to the ENT let me know my left ear had settled at a moderate-to-severe hearing loss, but that it was likely to get worse.

Time to address my hearing loss

After I got married in 2013, my husband started to gently nudge me toward looking into hearing aids. He thought being able to hear better would make me happier, and I think he also dreamed of the day when he would not need to repeat every third thing he said. But, I resisted. I was managing just fine with being able to hear out of only my right ear, or so I thought, and I still did not want to have anything indicating a visible disability. In hindsight, I am frustrated with my own vanity and stubbornness, and I wish I had pursued a solution earlier.

By the fall of 2018, I realized that my own selfishness was keeping me from being able to hear the tiny voices of my young children. While I certainly was able to attend to and address their needs, I was beginning to notice their frustration with my inability to help them and respond to questions quickly. I visited a local ENT to inquire about a hearing aid, and he took one look at my ear and then the epic tome that was my medical file, and he referred me out to a center for more specialized care.

I was crestfallen to discover that because of my history of a recurrent cholesteatoma, I was not a candidate for the discrete in-ear hearing aid I had originally sought. Exacerbating that was the report from the audiologist that showed that my hearing had degenerated further, and I was now suffering from a severe-to-profound loss in my left ear. In particular, it seemed that my ear was having trouble picking up the lower and higher frequencies, which explained why I was having so much trouble hearing my kids.

New technology (to me)! 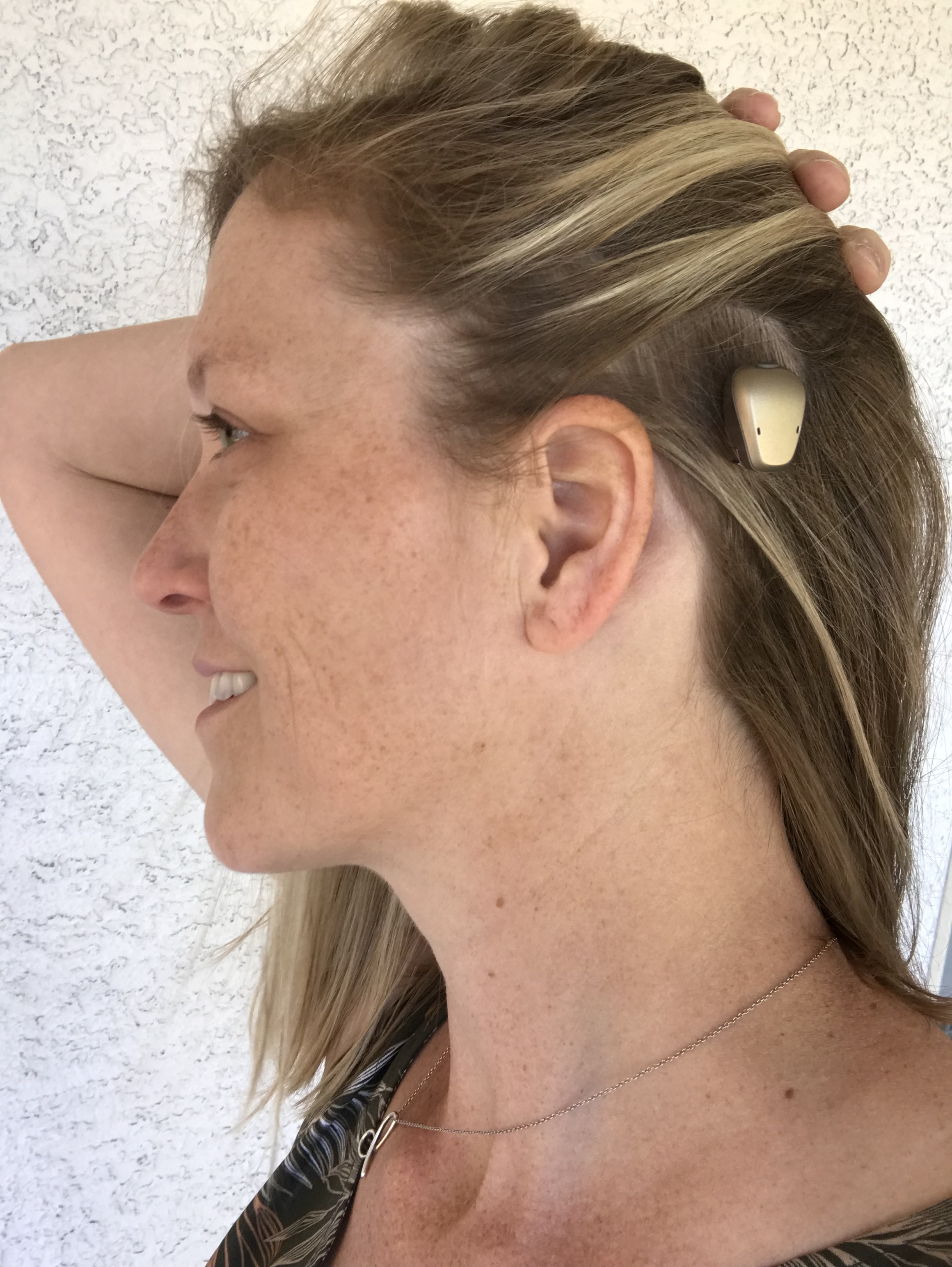 Both my ENT and my audiologist suggested that I was an excellent candidate for a (new-to-me) technology, something called a bone conduction hearing implant. It would require a minor surgery where an abutment would be surgically placed in my skull, followed by the activation of an external sound processor a few months later. I was still on the fence on whether it was something I wanted to pursue.

I was not afraid of the surgery, I had had plenty of those, but my ego continued to persist. Would a bone conduction hearing implant be a completely obvious indicator that I had a hearing problem? It seems silly and completely frivolous, but what ultimately sealed the deal for me was the fact that I could choose the color of my Baha 5 Sound Processor, and that the gold option nearly matched the highlights in my hair. After testing out the Baha 5 Sound Processor and holding it up to my hair, and confirming that it seemed to disappear, I was on board.

I had the abutment surgery at the end of March of 2019, and after a few initial concerns about the surrounding skin covering the implant, the swelling subsided and the healing process progressed without issue. On May 22, I had my processor, gold and matching my highlights and all, activated and attached to the abutment on my head.

Baha 5 System filling in the gaps

It is funny, I saw the internet videos of people hearing for the first time, and I would think, ‘Oh, they’re so emotional, that won’t be me. I can already hear so this is just going to make things better.’ But, better is such a marginal way to describe the difference after my processor was turned on. I had always been able to piece together what was going on based on social cues and the louder noises around me, but the Baha 5 System filled in the gaps.

It is like putting on glasses; beforehand, you have the gist of what you are looking at, but after, you can see everything clearly. I can now hear everything clearly. I found myself staring at the audiologist’s fingers as she demonstrated how to snap the sound processor to the abutment, and I fixated on the loud door of the office building opening and closing as I left for my car. The zip of the seatbelt as it came out of its holder was funny and unexpected. Listening to the radio on the way home, I realized I had always been able to feel the beats in music, but now I could actually hear them.

I am over a week in now and still getting used to it; things can be a little overwhelming. I am still getting used to hearing echoes and wind and the air conditioning. I did not realize before my Baha System that silence can make noise, or just how loud the grocery store is. But, I can answer my kids’ questions and I am not asking people to repeat themselves, so it is worth it. And, despite my expectation that it would disappear, you can absolutely tell I wear an external hearing device. I am not as incognito as I had maybe hoped. But it’s ok, because for the first time in my life, I feel like I can hear everything.”