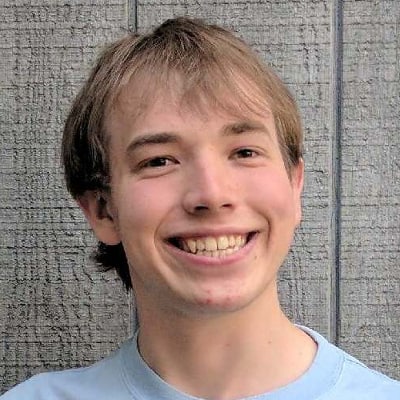 When Sam was 11 months old, he contracted bacterial meningitis. He underwent treatment, but afterwards he was diagnosed with profound hearing loss.

“The left is still my preferred side because I grew to depend on my left side a lot in those four years,” Sam said.

He said the main challenges he faced growing up with hearing loss were based on other people’s perceptions of what he could and couldn’t do.

Sam said those obstacles gave him the opportunity to disprove the negative stereotypes about deaf and hard-of-hearing individuals.

“The most powerful example was a school who said, ‘We don’t take your type here,’” he said.

After his family was told that, they pushed back and he was admitted into the school.

He said those experiences helped give him the determination to work through adversity.

“I learned to never accept a ‘no’ when it’s given unfairly,” Sam said.

Sam said he has always been interested in mathematics, so it was a straightforward choice to pursue the field further in college.

He chose Wesleyan because it had a great math program and it was a smaller college, better suited to his needs. It’s also the school both his parents attended.

“My goal is to go all the way to PhD if I can,” Sam said. “I’d like to become a professor so I can teach students and share my love of mathematics.”

In his free time, Sam enjoys playing video games and board games, going for hikes, swimming, and spending time with friends.

Sam said he was excited to learn he had received the Graeme Clark Scholarship.

“It was an unexpected surprise, and it was really nice to get that news,” he said.

He expressed gratitude for how his Cochlear™ Implants have helped him get where he is today.

Sam said he’s inspired by his mom’s determination, especially when it comes to facing obstacles.

“She has relentlessly supported me in just about anything I’ve wanted to do for the past eighteen years,” he said. “She cares that much about me, and if she’s able to do that, so should I.”

He also finds inspiration in the life of Srinivasa Ramanujan, an Indian mathematician who made several key breakthroughs in the field despite having no formal training.

“He came from the most humble conditions, with all the odds in the world stacked against him,” Sam said. “If he can do such good things, why can’t I?”

Sam’s advice is to take every opportunity to network, because it helped him secure an internship and other opportunities.

“The power of networking can be very large and very powerful,” he said. “Talk to people, and actually get to know them, you know? Networking is something you don’t ever want to not do.”

The Cochlear Graeme Clark Scholarship is a unique award open to Cochlear™ Nucleus® Implant recipients. It honors academic achievement and a demonstrated commitment to the Cochlear ideals of leadership and humanity.